Dauntlesstransfer initiates, including Tris, who eventually becomes her primary love interest. This is a mobile app for Divergent Fans. We have information, news, activities and quizzes about Veronica Roth's Divergent universe." > Four Character Information and Images - Divergent App - Edbydesign.com 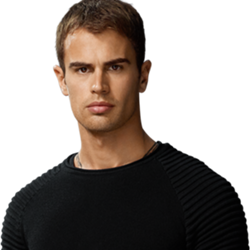 Tobias "Four" Eaton is the initiation instructor for the Dauntlesstransfer initiates, including Tris, who eventually becomes her primary love interest.

To most, he is known as “Four,” a name given to him because during his own Dauntless initiation it was revealed that he only has four fears.

Just like Tris, he was born Abnegation, but chose to transfer to Dauntless to escape the abuse of his father.

At first, he has an elusive, mysterious personality, and it takes a while for him to allow himself to become close to Tris. He is very protective of his loved ones.