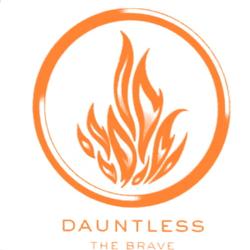 Dauntless is one of the five factions in the world of Divergent, the faction dedicated to courage, bravery, and fearlessness.

It was formed by those who blamed fear and therefore, cowardice as a cause of the problems society faced. It tries to fight cowardice by giving preparation and the ability to act during fear to its members.

The members generally wear provocative black clothing, are pierced, tattooed and have a tendency to seek thrill.

Dauntless are the only faction that rides the train, and they are always seen jumping of it, as the train only slows down rather than stopping.

The faction name "Dauntless" comes from the word "daunting" which would be used to describe something intimidating or fearful.