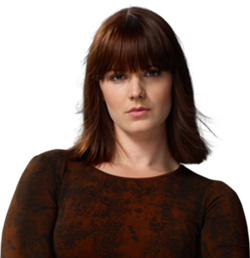 Molly Atwood is one of Peter's lackeys along with Drew and she also comes from Candor. She is Tris's enemy and she tends to mock her and her friends whenever she has the opportunity. Molly is almost always with Drew and Peter, or at least where it is mentioned by Tris.

She constantly mocks Tris, like the time when Tris was caught naked by Molly, Peter, and Drew. In stage one, she fights with Christina and beats her easily, but then she fights with Tris.

Tris, angry at her, knocks her down. She kicks and kicks her from rage. Tris was carried away from her by Four while she's bleeding. Tris is asked if she needs to take a walk to calm down, to which she replies that she is fine and knows she should feel a little guilt for beating her, but doesn't.

However, Tris does feel bad about it after Eric compliments her. Molly's rank gets lower than Christina and because she failed to a weak opponent (Tris), she pointed out that Tris would "Pay for this".

She made an Erudite reporter write a nasty article about Tris's dad. Molly lied about Tris and her father having a poor relationship to the reporter. This infuriated Tris.