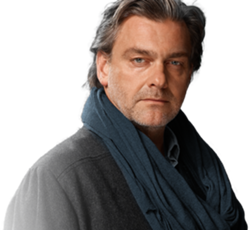 Marcus is first mentioned after the aptitude tests during the Priors' dinner discussion, he is brought up as a colleague of Andrew Prior who was written about in a report released by the Erudite council member, Jeanine Matthews.

The report was centered around Abnegation's incompetence in leadership because Tobias was, supposedly (later proven), abused by Marcus.

Marcus is seen again when Tris and Tobias go through his fear landscape, holding a belt and attempting to beat Tobias.

Marcus is physically seen for the last time during the Abnegation slaughter when he joins forces with Tris, Mr.Prior, Caleb, and Peter to go to the Dauntless headquarters and stop the Dauntless from killing people.

When he sees Tobias there, he tries to hug Tobias (it is not known if this was out of genuine concern for his son or part of a facade to hide his abusive nature) but is shoved away by Tris and called out on his abuse.