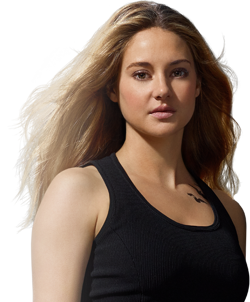 Beatrice "Tris" Prior is the main protagonist and narrator of the Divergent series. She is a strong-willed sixteen-year-old girl who hates showing weakness.

Tris was born in the faction Abnegation, but she transferred to Dauntless when she was sixteen and must face the fact that she is Divergent. When she arrived in her new faction, she opted for a change of name to go by. She decided to use Tris as a nickname for Beatrice, hoping for a fresh start in a new faction.

Beatrice was born to Andrew Prior and Natalie Prior, after their only son, Caleb Prior. Beatrice's family was originally in Abnegation, the faction that cultivates the virtue of Divergent selflessness in the future city of Chicago.

As Abnegation, Beatrice had always known the life she would follow—one free of vanity and focused on serving others and helping the Factionless. Despite this, Beatrice never fully learned to willingly follow their faction's virtues.

She was often overshadowed by her brother's apparent selflessness and often found herself thinking about her wants. All of this, to be explained later, was due to the rare trait that Abnegation were mostly born with: Divergence.